C3D Labs, the provider of development toolkits for engineering software, is pleased to announce that its 2020 revenues increased by 41% over the previous year. For a fourth year in a row, the company earned more than half of its income internationally.

C3D Labs is best known for delivering the most complete software development kit (SDK) to the engineering industry, as the SDK consists of five modules: a robust geometric modeling kernel, a flexible constraint solver, a standards-based data exchange module, a ground-breaking 3D polygonal mesh to B-rep converter, and a speedy 3D visualization engine. All modules are based on the company’s own sophisticated mathematical algorithms applied to advanced software development technologies.

C3D Labs maintained its global customer base, including in Great Britain, Italy, Japan, Korea, Spain, Sweden, Turkey, and the USA. International customers contributed 59% of annual revenues. Key customers include Altium in USA, one of the world's leading developers of software for computer-aided designs of electronic components; Artec 3D in Luxembourg, the market leader of hand and portable 3D scanners; and CYPE in Spain, a BIM software developer.

The C3D Toolkit offers many new methods that were implemented during the last year. The methods include conic-section surface construction; solid-body to sheet-metal conversion; arbitrary body stamping; creating bends on curved edges; and merging smoothly joined faces. The majority of the innovations added to the toolkit were due to requests from customers. 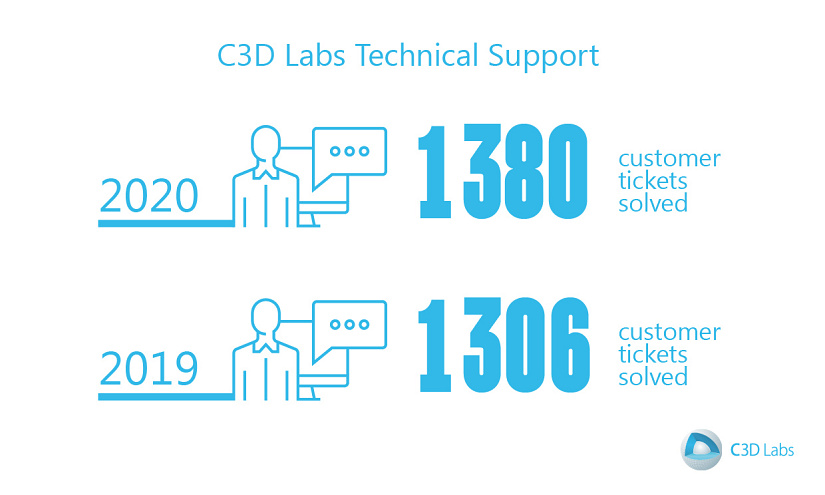 Also during 2020, C3D Labs grew its team by hiring additional mathematicians and programmers for the kernel, solver, converter, and visualization teams.

“The primary result we achieved during the dramatic and unpredictable events of last year is that we did not lose our pace of development,” said Oleg Zykov, CEO of C3D Labs. “We brought out a new version of the C3D Toolkit on time and released updates every month. No customers stopped working with us; on the contrary, some expanded their licenses.”