C3D Labs is pleased to announce the release of C3D Toolkit 2020, a major update to its software development kit (SDK) used by developers of engineering software. The emphasis in this release is on advanced surface modeling, along with significant enhancements to all five modules in the toolkit:

The five modules are closely integrated with one other, and so together represent the most complete, all-in-one solution on the market today in building desktop, mobile, and cloud-based applications for 3D modeling.

After assessing the needs and requirements of software in many different industries, C3D Labs enhanced C3D Toolkit 2020 with powerful capabilities for developing innovative software products in the fields of building information modeling (BIM), virtual reality (VR), 3D scanning, and digital manufacturing -- as well as for classic CAD, CAM, and CAE systems.

When preparing the 2020 release of C3D Modeler geometric kernel, C3D Labs focused on complex surface modeling. This is considered the high-end of CAD functionality and paves the way for solving design tasks in the aerospace and shipbuilding industries. And so we added to the new version the following functions important in surface modeling.

New: Smooth Curve Construction. “Smooth” means that changes in curvature are smooth. Smooth curves can be built either on vertices or on tangents of reference polylines. Smooth curves are edited with a geometric determinant, which contains information about derivatives at individual points on the curve. You can achieve the desired curve shapes by changing the geometric determinant.

New: Conic Section Surface Construction. Conic section surfaces are obtained by moving a flat generatrix along a spine curve. As it moves, the generatrix changes its shape according to control functions. A conic section surface can be made to join two specified surfaces smoothly. The function allows you to build surfaces with five types of sections: conic section curves, sections in the form of NURBS, sections in the form of arbitrary splines, circular sections, and ruled sections.

New: Managing Offset Curve and Surface Distances. The distance of offset curves can now differ at either ends of the curves, and can change based on linear or cubic functions of the curves’ parameters, or remain constant (as in previous releases).

New: Merge Multiple Faces. You can now replace two smoothly joining faces of a body with a single face.

Improved: Construction of Surfaces from Curve Meshes. When constructing a surface from curve mesh, multi-segment contours are available to define a network of curves. This extends the ability of building on this surface. Internal parameterization has been improved for the surfaces, making it possible to improve the smoothness of the junction between the cells of the surface in some cases. 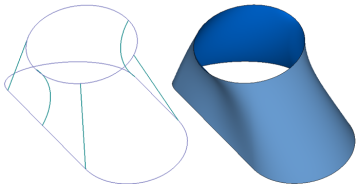 Surface on mesh of curves

Improved: Swept Shell Operations. The new release adds the ability to explicitly control the movement of generation elements according to the normal of the surface on which the guide curve lie, if it is determined that such a surface can be used as a guide curve. This option generates different shapes of the sweep body. In addition, it is now possible to set simple convex bodies as the generatrix, and not just curves or faces, as in earlier releases. This allows ever more complex bodies to be created without additional construction.

Improved: Lofted Surface Domes. Sectional (or lofted) surfaces gain a feature for controlling the shape of surfaces when end sections are set as points. We called this option “the dome.” By setting the vector and coefficient, you can control the shape of the surface when approaching the point section. 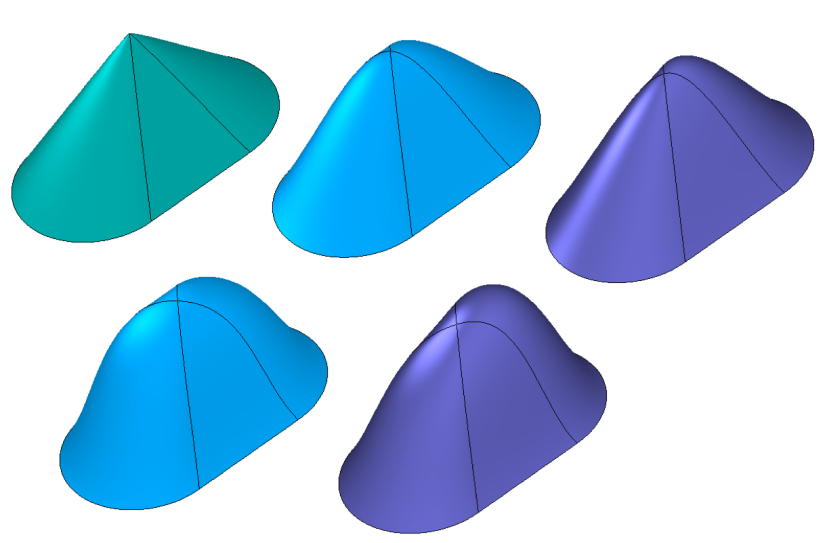 Improved: Expandable Surface Shell Cutting. When cutting solids with a surface, you can now control the extensions of the following surface groups: flat surfaces, rotation surfaces, and extrusion surfaces.

Other improvements. The median shell function has been improved to allow you to set a range of thicknesses, instead of working with a single value. Disconnected faces now extend towards one another until they intersect. Fillet processing is improved. 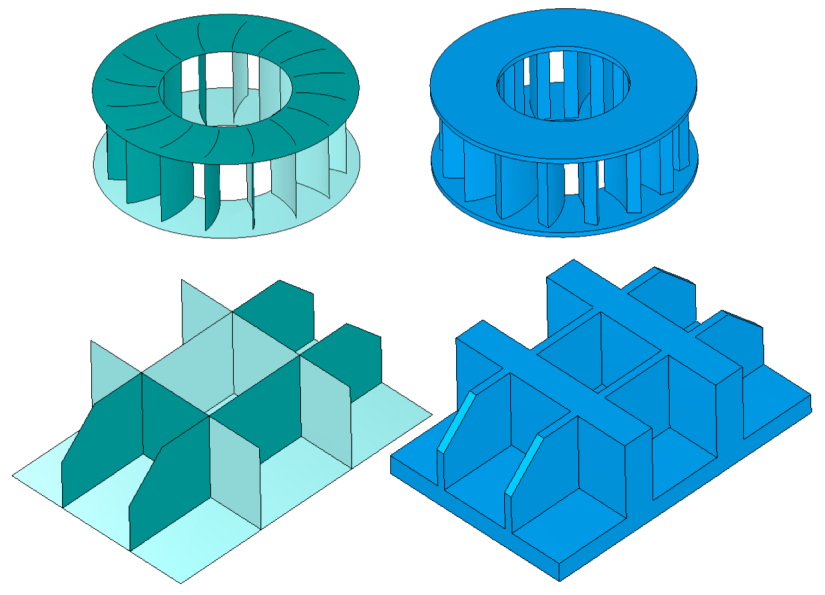 New: Arbitrary Body Stamping. A new method in stamping sheet metal is to use arbitrary bodies, just like performing it physically with dies and punches. The thickness of the stamped section can be different from that of the sheet. 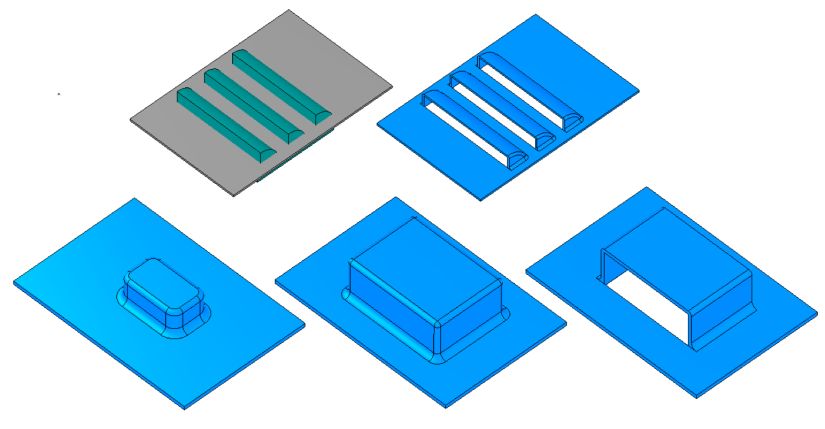 Coming soon: Flanges Along Curved Edges. Flanges can be added to single curved edge or even to a chain of several tangent edges. Curved edges flange can, of course, be flattened and bent again with the unfold and fold tools. 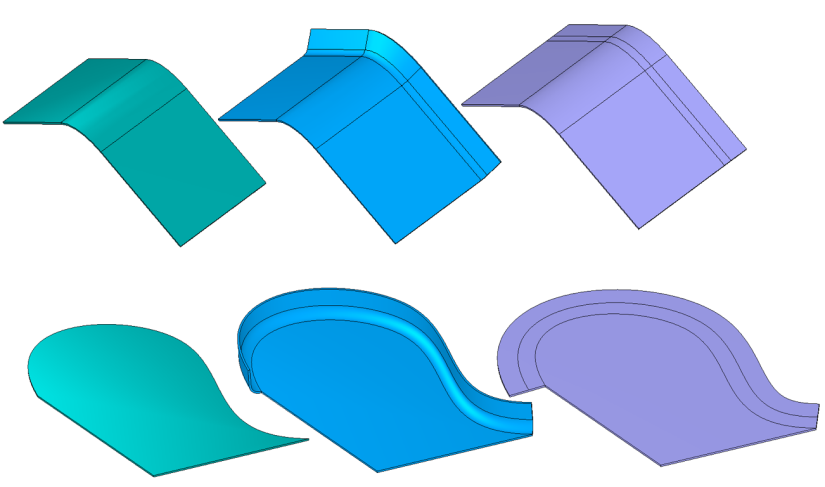 First released in 2019, C3D B-Shaper kept the spotlight throughout the year. This new module transforms heavy polygonal meshes into optimal B-rep solids for editing and visualization in 3D software. Our B-Shaper is useful in the areas of reverse engineering, BIM, VR, and topology optimization. Over the last year, we kept testing its algorithms with thousands of incoming models to improve on the high-quality of conversion results.

Improved. In B-Shaper 2020, we simplified the mode of B-rep construction. If surface-surface intersections fail, then boundary edges are constructed, which is acceptable for visualizations.

The result of applying the simplified mode to B-rep construction

Improved: JT Support. The JT format is the most modern one on the market and so it is greatly valued by developers of 3D engineering applications. C3D Converter 2020 now reads the attributes of parts from JT by accessing the metadata of the file, and then transferring the model’s integral properties (volume, surface area, density, mass) to STEP and JT formats.

Improved: Mesh Translation. In C3D and JT, meshes are arranged differently from each other, and so C3D Converter in earlier releases quickly wrote only those meshes that lacked topology. After a deep rewrite of the mesh transformation algorithm, the 2020 release quickly exports meshes with topology to JT. 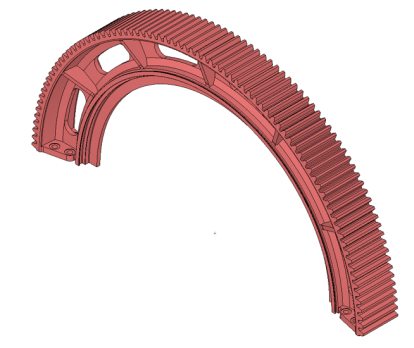 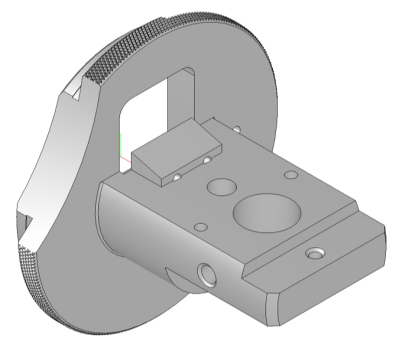 Improved: PMI Handling. C3D Converter 2020 now reads embedded fonts in JT to correctly display full PMI (product manufacturing information). As the C3D format itself does not support fonts, transferring PMI data through the C3D format is performed by marking PMI geometric objects with special attributes and then providing the ability to substitute fonts for the STEP format. This capability will be enhanced in future releases.

C3D Vision is aimed at the precise visualization of geometric construction and high performance when working with big models, and so it has been developed especially for use in 3D engineering applications.

New: Interactive Tools. The 2020 release introduces a new group of interactive tools called “manipulators.” The basic manipulator is the SceneWidget, which is used as part of the object editing processes.

Among the other manipulators we developed, there are these:

Implementing manipulators in a user application

Improved: Tool Selection. The tool for selecting geometric objects with a frame (window) is improved by letting users select either unifying or cutting frames, and their combinations – set by specifying the frame from left to right or from right to left.

Selecting with a frame

Improved: Zooming. A new zooming feature available in C3D Vision is zooming by a frame.

Zooming by a frame

The 2020 edition of C3D Toolkit is available now.

The entire toolkit, as well as individual components, is available for testing in your programming environment at no charge. For details, see https://c3dlabs.com/en/evaluation/.

To learn more about C3D Toolkit 2020, watch the webinar from C3D Labs DevTeam.