C3D Labs is pleased to announce that it is developing a new product to transform polygonal models into boundary representation (b-rep) bodies. The new module, named C3D Mesh2Brep, will be added to the C3D Toolkit and is designed to work together with the C3D Modeler geometric kernel. 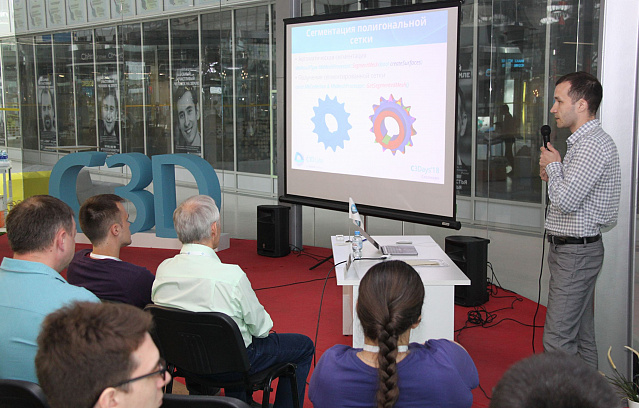 The new development was first revealed during the C3Days conference, held in May in Moscow. C3Days is the annual conference for engineering software developers, and is organized by C3D Labs. Among the international and Russian customers in attendance this year were Altium, ASCON, Nanosoft, Eremex, LEDAS, Renga Software, and Skoltech.

B-rep is the primary representation method for most existing geometric modeling systems. Polygonal models are most often obtained from 3D scanning and non-CAD design systems. With C3D Mesh2Brep, CAD developers will be able to transform polygonal models into b-rep bodies. The resulting b-rep model then allows users to employ CAD tools to make changes (such as Boolean operations and chamfers), and to generate additional data, such as through projections and sections.

There are many useful applications of C3D Mesh2Brep. One possible use is in the area of reverse engineering, which involves 3D-scanning a part and then turning it into an editable CAD model. In CAE systems, developers could use the Mesh2Brep module to process the results of topological optimization. Computer graphics designers could use the new module for grid smoothing, decimation, and applying compression algorithms.

The transformation of a polygon mesh is a three-step process by C3D Mesh2Brep:

If users find the result unsuitable, they can use the advanced tools included in C3D Mesh2Brep to edit the segmentation and surface recognition controls.

«Our new C3D Mesh2Brep module has two main modes: fully automatic, and interactive», said Andrey Tumanin, Lead Developer of the C3D Modeler geometric kernel. «Automatic mode generates acceptable results for high-quality polygon meshes, which are triangulations of CAD models that mostly contain elementary surfaces. If, however, a polygon mesh is constructed from 3D object scans and so contains general surfaces, then the user will have to be involved in the process».

About the Beta Program

C3D Labs is now gathering feedback to create the first ready-to-use version of the module. A beta version will be available for testing in July, with the final release scheduled for September this year. To join the beta testing program, contact info@c3dlabs.com.