Most of the improvements made to C3D V16 were requested by customers, fifteen as of now. Overall, the latest release of C3D features more than 100 improvements to the kernel's functionality.

For this release, the C3D development team focused on improved the sectioning and cutting processes, adding efficient parallel calculations within the kernel, and on securing threads for binding multiple surfaces. The geometric solver now boasts clustering, journaling, dragging, and reflection symmetry for 3D shapes, as well as advanced options for building parameterized splines. In addition, there are major changes to 2D Boolean operations.

The updated C3D converter imports data in STL and VRML formats, passes attributes during conversion, and adjusts the accuracy of exported STL models. Thanks to optimized multi-threading, data are now processed much faster during the importing of 3D models.

To improve the quality of software products, C3D Labs has extended its reference database to 350,000 3D models, and increased the total number of Boolean operations being tested daily to several million. The lab implemented support for Clang 3.5 and Visual Studio 2013 compilers, the latest C# programming language, an extended list of supported Linux builds, updated test applications for Linux, and a newly illustrated user manual.

Among the new capabilities of C3D Modeler V16, the following are perhaps of greatest interest to customers:

The C3D Solver adds a new geometric object called the “cluster.” Essentially, a cluster is a solid body with its own constraint system. Clustering is useful for arranging geometric models against a hierarchy of nested sub-assemblies. In this use case, designers can now employ the same solver instance for an entire assembly. This saves computing resources and speeds up calculations when modifying 3D models.

To facilitate the development of applications, C3D Labs has implemented journaling of all API calls in the 2D solver. All details regarding interactions of the C3D Solver are recorded automatically to file. This allows remote debugging of bugs that are reported by customers, and is especially useful because the same environment in which they use the kernel is not needed by developers.

For assemblies in which some objects are a full or partial mirrored reflection of others, C3D Solver has a new type of geometric constraint for 3D shapes: reflection symmetry. Reflection symmetry can be applied to any geometric object, such as curves on pairs of bodies or external facets.

C3D extends the number of functions used in building parameterized splines in V16. These include the following: a new dragging function; a new interpolated spline function with any type of constraint (such as those available for the ordinary NURBS curves); a new function for recognizing the types of conic sections defined as NURBS curves; and a new constraint for defining spline configurations through its points with fixed coordinates, as well as through vectors of the 1st, 2nd, and 3rd derivatives at points with the specified parameters. 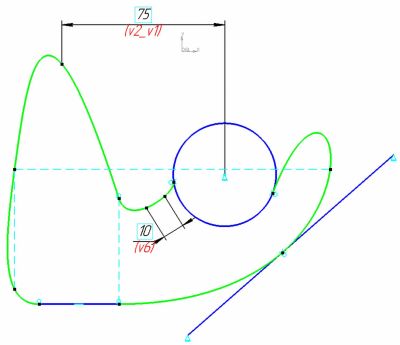 The updated C3D converter adjusts the accuracy of exported STL models by three triangulation parameters. These are the maximum deflection, the maximum pivot angle of a normal curve (or surface), and the maximum length of a triangle side.

The update imports polygon models in STL and VRML formats. As well, the software now transfers attributes of items being exported, such as name, designation, and owner.

Thanks to the improved multi-threading capability, C3D V16 converts data much faster when importing models. For instance, it is 1.7 times faster for Parasolid files (x_t, x_b) and 2.2 times faster for STEP files.

For More About C3D

Existing customers are encouraged to download the updated kernel today. To learn more about the C3D geometric kernel, go to c3dlabs.com/en/products/c3d-kernel/

To submit your request for a C3D V16 evaluation version, register at c3dlabs.com/en/evaluation/