Skolkovo, Russia: June 23, 2015 — International students spent a day with staff from C3D Labs at the Skolkovo Institute of Science and Technology (SkolTech). They were there to learn how to use the C3D platform for science-oriented software development. The event was held in the institute's highest-tech classroom, the Concurrent Engineering Design Laboratory (CEDL). 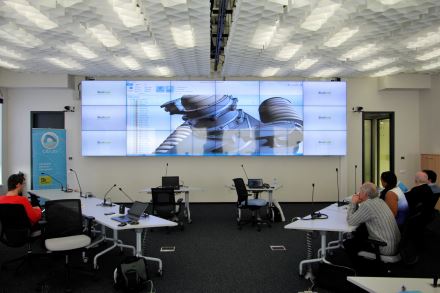 C3D Labs is one of the first innovation firms working with SkolTech to be invited to the new CEDL laboratory, with the participation of dean of education Clément Fortin. C3D staff conducted a workshop dedicated to using 3D modeling with state-of-the-art technology. Director of C3D Labs Oleg Zykov used a huge screen consisting of 18 widescreen monitors to present the history of the company, and then described C3D’s modules: Geometric Kernel, Parametric Kernel, and Conversion Module. He went on to demonstrate the C3D’s new visualization module using the C3D Viewer as a test application, and then shared his vision on how C3D’s technology can be implemented by SkolTech students in scientific and commercial IT projects. 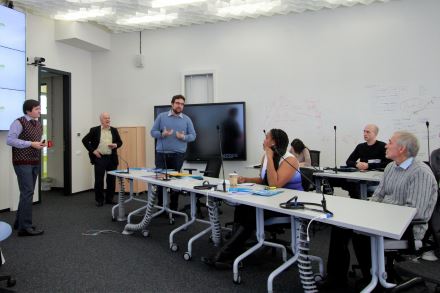 C3D Product Manager Arkadiy Kamnev presented the C3D educational licensing program (ELP) by talking about several real-life case studies in which C3D is being used by educational institutions. EasyBlister, for instance, is a system for designing blister packs using C3D. It was developed by a student at Saint Petersburg State Institute of Technology at the request of Klöckner Pentaplast, a German company. HABITEK is an example of a firm developing a commercial cloud-based CAD running on C3D. Head of C3D development Nikolay Golovanov was the guest of honor. He answered questions from the Russian and foreign students, and then presented a signed copy of his book ‘Geometric Modeling’ to SkolTech's library. The book had been unveiled officially at COFES 2015 (Congress On the Future of Engineering Software) in Arizona, USA.

SkolTech students will this month begin testing C3D’s functions, and then a decision will be made about which research projects are best suited to employing software components from C3D Labs.

“C3D Labs delivered a professional seminar by clearly explaining the capabilities offered by their kernel for both the teaching and research domains,” said Clément Fortin of SkolTech. “We look forward to begin our testing, and using the kernel specifically in research of PLM and model-based concurrent engineering applications and processes.”

The Skolkovo Institute of Science and Technology (SkolTech) is a private graduate research university in Skolkovo, a suburb of Moscow, Russia. Established in 2011 in collaboration with Massachusetts Institute of Technology (MIT), SkolTech educates leaders in global innovation, advanced scientific knowledge, and the fostering of new technologies that address critical issues facing Russia and the world. Applying international research and education models, the university integrates the best Russian scientific traditions with twenty-first century entrepreneurship and innovation.

The Center for Entrepreneurship and Innovation (CEI) within SkolTech provides education, research, and administrative functions that support the practice of entrepreneurship and innovation, spanning across and coupled to degree-granting programs.

History of C3D Labs and SkolTech

A May 2015 workshop organized by SkolTech and MIT led to C3D Labs working with SkolTech. The SkolTech workshop presented the result of the first year of a master's program in the field of new production technologies. This had been a pilot project launched in January 2015 with MIT as part of the Russian national technological initiative in production technology.