Moscow, Russia and Skellefteå, Sweden: May 12, 2015 — Elecosoft Consultec, a leading developer of IT tools and services targeted at the construction and installation industry, announced today that it has chosen the C3D geometric kernel from C3D Labs for its Staircon software.

Staircon is the company’s CAD/CAM application for the timber staircase industry. The software provides the best possible support for the simplified, cost-effective production of stairs made of timber — all the way from sales through to manufacturing. By connecting the software to CAM systems, complex handrails and other stair parts are milled to perfection. 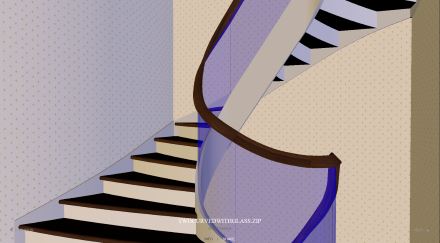 To meet the growing demand from users for more flexible design options, Elecosoft Consultec decided to replace its in-house geometry library with a more robust solid modeling kernel. The company evaluated a number of kernels before deciding on C3D from C3D Labs. The top reasons for choosing C3D was its robustness, flexible licensing model, and good support.

“By integrating C3D in our applications, we now deliver robust, high-level functions to our customers in a shorter time than ever before,” said Östen Lundahl, Senior Application Architect at Elecosoft Consultec.

Another key factor for Elecosoft Consultec was the ability to directly employ C3D on the .NET platform. Many clients of C3D Labs use C# as their primary programming language for their projects, and so requested that C3D Labs support it. To adapt C3D to .Net, C3D Labs collaborated with technology partner Rubius, who developed NetC3D in short order.

Elecosoft Consultec became the first customer for the new platform. And starting with C3D V16, the C# wrapper will be available to all C3D users as a part of the base distribution.

“Thanks to their valuable advice and comments, Elecosoft Consultec made a significant contribution to the creation of the first version of our kernel on the .NET platform,” said Anna Ladilova, PhD mathematician and programmer at C3D Labs.

Elecosoft Consultec began in 1974 as Consultec, a spin-off from a construction company based in Skellefteå, Sweden. Initially, it worked as an architectural design office specializing in project activities. As of the early 1980s, the company began developing software for solving the engineering problems. Its software is designed to make the lives of its users easier through planning, estimating, designing, and follow-up.

In 2003, Consultec was taken over by the British company Eleco plc. The group focuses on software developments and services for the architectural, engineering, and construction industries. Eleco employs 194 employees in Sweden, Germany, the United Kingdom, Belgium, and The Netherlands.

Today Elecosoft Consultec is one of the leading developers of software for construction and installation industry, with ten regional offices in Sweden and Belgium. The company has over 3,500 major contractors and small firms as clients. The company services the programs it supplies in the fields of architecture, design, and customer-specific software development.