C3D Labs (ASCON Group) today announced that NTP Truboprovod has entered into a licensing agreement to use the C3D geometric kernel for its portfolio of software products. NTP Truboprovod is the leading Russian developer of software for performing engineering analysis of piping and equipment.

The C3D kernel will power NTP Truboprovod’s PASSAT application, which provides stress analysis of vessels and equipment. C3D optimizes geometric modeling functions and calculations of complex geometric shapes, such as volumes, surface areas, centers of gravity, and moments of inertia.

In addition, the powerful kernel expands PASSAT’s export functions, allowing the geometric properties of vessel models to be exported in standard design formats. This provides PASSAT with a new level of integration with popular CAD software.

“The geometric kernel that we used in PASSAT until now was quite simple as it supported only the most basic functions,” said Aleksey Timoshkin, Head of the IT department at NTP Truboprovod. “To develop on our own the advanced functionality we now require is for our small team an overly ambitious goal. When we analyzed different 3D modeling libraries, the final choice came to C3D from ASCON, a Russian company with whom we have a long-lasting relationship. 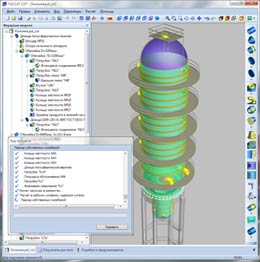 “The C3D solution demonstrated excellent test results, because its core philosophy is close to that of PASSAT. Now we can easily implement new functions for modeling, as well as integrate them with other systems in our products. We will be using the С3D kernel in our other applications, such as modeling protection equipment with our “Safety Valve” program. We believe that the availability of a Russian high-tech product such as C3D is a significant event for the industry.”

“ASCON and NTP Truboprovod have been partners for a long time, and so the licensing of C3D brings us to a higher level of cooperation,” said Oleg Zykov, C3D Product Director at ASCON. “The software developed by our partner is recognized by the engineering community by being the de facto standard in the field. The C3D geometric kernel will create new opportunities for NTP Truboprovod, its developers, and users.”

About NTP Truboprovod
NTP Truboprovod specializes in the automation of project design and industrial safety of processing facilities. The company's products benefit from more than 40 years of experience in stress and hydraulic analysis, and in designing thermal insulation and emergency relief systems. Software from NTP Truboprovod is the unofficial standard in Russia, and is used by more than 1,200 companies in the CIS, Europe, and Asia. www.truboprovod.ru