Moscow, Russia: December 16, 2014 – C3D Labs is pleased to announce that Saint Petersburg-based NIP-Informatica has licensed the C3D geometric kernel. The kernel is being used to power Techtran, their software for designing CNC machine control programs. With C3D components built directly into the CAM system, users will now be able to import 3D models in various formats, view them, prepare blanks for turning CNCs from 3D models of future parts, and retrieve geometric data from 3D models. 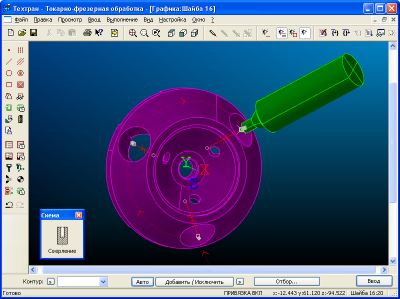 Among developers of CAM systems, NIP-Informatics is now the third licensee of C3D. They join LO CNITI of Russia and Solar Tech of South Korea.

“Some time ago we began to notice that Techtran customers wanted to directly access 3D models created by other designers,” said Yuri Romanchenko, lead engineer at NIP-Informatica. “We thoroughly analyzed and considered many different modeling software packages on the market that were capable of importing data in popular 3D formats, and finally decided on the Russian system called C3D. Among its many powerful features, we especially have praise for its affordable price, time-proven quality, and direct support from the developers.”

“Collaboration between C3D Labs and NIP-Informatics dates back to 2013,” said Oleg Zykov, CEO of C3D Labs. “Now that the first version of the C3D-powered Techtran is almost ready, we can say for certain that this collaboration was a success. NIP-Informatica’s developers managed to familiarize themselves quickly with the API of our geometric kernel and then dramatically expanded the capabilities of their CAM system. We hope that the new Techtran release will meet customers' expectations fully and so be successful in the market.”

The new versions of Techtran for turning CNCs and milling CNCs are planned for release in early 2015.

Founded in 1990, NIP-Informatica is develops CAM software for CNC machines under the name TECHTRAN. Users of software products and solutions provided by NIP-Informatica include professional engineers, designers and technologists, architects and designers, electricians and hydraulics engineers, surveyors and geologists, geotechnical engineers designing infrastructure such as road networks, prospectors, engineering specialists in structural, foundations, and tunnels, and system administrators and project managers. More than 3,000 licenses of TECHTRAN software are currently used by more than 1,200 companies. For more information, visit www.nipinfor.ru/en/eabout.