LEDAS Ltd. and ASCON today jointly announced the successful integration of ASCON’s C3D kernel into LEDAS Geometry Comparison technology. This is the first third-party component to benefit from the C3D kernel; previously, third parties had only developed CAD/CAM software as applications on top of C3D.

LEDAS develops computational components and provides R&D services for the CAD/CAM/PLM market, while ASCON is the leading Russian CAD/AEC/PLM vendor and developer of KOMPAS-3D modeling software and C3D kernel software.

LEDAS established its Geometry Comparison technology to check and locate all of the differences between similar-looking geometric models. These changes can come about through revisions made to a model; from files generated by different CAD systems of the same model; the result of polygon and canonic or NURBS representations of the same geometry; or through data generated by various steps in the processing of 3D geometry. 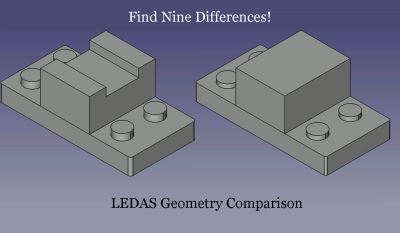 Making comparisons between 3D geometry requires operations performed at the most basic levels, and so are usually provided by 3D modeling kernels, of which C3D is an example. Geometry comparison is a component technology powered by C3D, and so this integration expands C3D’s sphere of application. The kernel is now being marketed as a general purpose tool for any engineering software needing advanced 3D modeling.

ASCON’s conditions for licensing C3D are very flexible, especially for projects that are not yet generating revenue, an important point to a development house like LEDAS. As a worldwide value-added reseller of the C3D kernel, LEDAS gained a detailed understanding of the business benefits related to C3D and its technical capabilities.

“We first became familiar with C3D when we began a joint project with ASCON aimed at integrating our LEDAS VDM (Variational Direct Modeling) technology into C3D and KOMPAS-3D,” said Ivan Rykov, CTO of LEDAS. “Our long experience in developing and using 3D modeling software makes it possible for us to easily identify the advantages and bottlenecks of any 3D modeling kernel. C3D made a really positive impression on us while we were testing it in our Geometric Comparison project, especially with regards to its stability and with the technical support from ASCON.”

“C3D is constantly increasing its portfolio of customers,” said Oleg Zykov, CEO of C3D Labs, an ASCON subsidiary and the developer of C3D. “For the first few years, we focused on the Russian market, but now our goal for 2014 is to increase sales to the international market. Because LEDAS is well-known internationally, we consider the integration C3D with their technology as a good step in this direction.”

ASCON is a Russian CAD/AEC/PLM software developer and supplier founded in 1989. ASCON solutions address key issues of industrial design, engineering, preparation and release of drawing documentation, and product lifecycle management. ASCON software has been successfully applied across many industries, including machinery, automotive, shipbuilding, aerospace and defense, architecture, civil engineering, and electronics. The company has over 40,000 customers around the world. More information about ASCON is available at ascon.net.

LEDAS Ltd. is a private, employee-owned software company founded in 1999. It is the well-known developer of constraint-based tools and component technologies for the CAD, CAM, CAE, and PDM markets. LEDAS provides R&D and consulting services in the field of engineering software. More information about LEDAS is available at www.ledas.com.