Novosibirsk, Russia and Widnau, Switzerland: May 12, 2016 – LEDAS, a C3D Labs customer and partner, has announced that CAD Software Solutions (Switzerland) has licensed LGC technology for comparison of three-dimensional CAD models and has integrated it into the new plug-in for Autodesk Inventor. This software is expected to arrive on the market later this year. Inventor users will get an easy-to-use tool to compare 3D models in the CAD system itself. 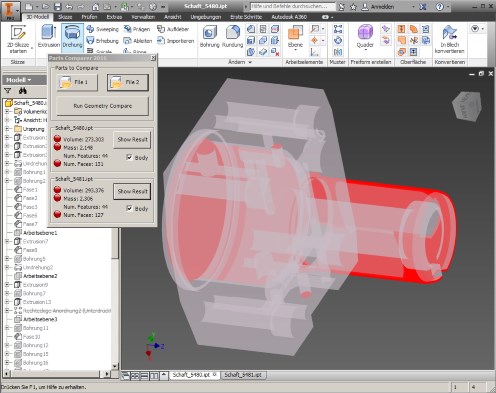 As previously mentioned, C3D Labs and LEDAS announced the integration of LGC technology with C3D geometric kernel in March 2014. At that time, C3D Modeler became the basis for software component that can be used to create CAD systems for end users (C3D kernel operates on the same principle). And now the first mention has been made of software developed using LGC.

“While several CAD companies already use LGC on a commercial basis, this is the first time we have made a public announcement of an LGC license agreement,” said Alexey Ershov, CEO of LEDAS. “This is very important for us, because we are glad to be cooperating with CAD Software Solutions to extend the technology in additional directions, such as 3D parts search.”

LEDAS Geometry Comparison makes it easy for developers to implement comparisons of 3D models, clearly pinpointing differences. These changes can come about through revisions made to a model; from files generated by different CAD systems of the same model; the result of polygon and canonic or NURBS representations of the same geometry; or through data generated by various steps in the processing of 3D geometry. Making comparisons between 3D geometry requires operations performed at the most basic levels, and so are usually provided by 3D modeling kernels, of which C3D is an example.

“Developing Inventor-based software is our core competency, and so we have major customers from the mechanical design industry using our other software,” said Paul Schuepbach, CEO of CAD Software Solutions. “We tested LGC for several months, focusing especially on large models and assemblies provided by customers. The results were very positive, confirming to us that LGC is the best choice for our brand-new application.”

C3D Labs specializes in the technology-intensive market of PLM components. The company develops and markets the C3D geometric modeling kernel, which is used in software products as the component responsible for constructing and editing 3D models. Computer aided design systems are the most widely known software in which kernels, like C3D, are typically used. As the software developer’s tool, C3D is today the only modeling kit that incorporates all four modules critical to CAD: 2D/3D modeling, 2D/3D constraint solving, 3D visualization, and file conversion. In 2013, C3D Labs became a resident of Skolkovo, Russia’s state development office park.

LEDAS is a private, employee-owned software company founded in 1999. It is well-known for developing constraint-based tools and component technologies for the CAD, CAM, CAE, and PDM markets. LEDAS provides R&D and consulting services in the field of engineering software. More information about LEDAS is available at www.ledas.ru

CAD Software Solutions is a private Swiss software company specializing in computer-aided design and a member of the Autodesk Developer Network specialized in Inventor customization. It focuses primarily on core technology for simplifying the use and visualization of large data sets in CAD assemblies and parts via Web and cloud apps. The company places a strong emphasis on mobile devices. You can learn more about CAD Software Solutions at www.morecam.ch and www.sparepartsplace.com