One of the most important events for me at the annual COFES (Congress on the future of engineering software) conference is Tech Suites. This is a series of briefings that are held by vendors who sponsor the congress. I find them exciting to attend as I get to hear what vendors are saying about their latest innovations directly to competitors and industry analysts, rather than only to potential customers.

The result is an open, dynamic discussion that delves deeply into underlying issues that don't usually come to the surface during typical sales events. This year at COFES 2018 I felt that the Tech Suites headliners were two -- OnShape, and Solidworks with xDesign – plus one more, the surprise change at the top of Spatial.

It seems to me that many agree that Jon Hirschtick, a co-founder of OnShape, is one of the most charismatic figures in the modern CAD world. The packed audience of OnShape’s Tech Suite was proof of this. But this is not the only reason why I think OnShape has won over Solidworks xDesign.

Today, the OnShape brand has a lot to boast about. It is a full-scale MCAD system, a top-notch "no files — no problems" policy with a single cloud database, thousands of users, its own app store with 51 partner applications, and tons of other reasons to transfer over from other MCAD systems. After creating and dominating the desktop MCAD market with Solidworks, Hirschtick created and dominated a whole new segment in the MCAD market as other major players are rushing to develop their cloud solutions as well. This is somewhat reminiscent of Tesla, isn't it? 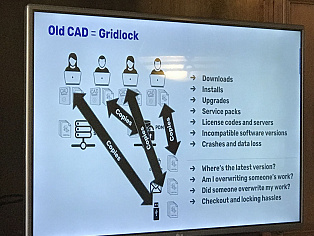 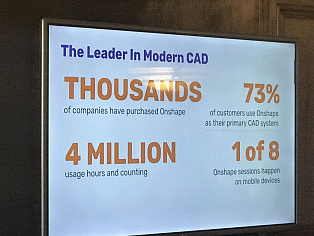 So then what does that make Solidworks xDesign? It is, in fact, a timid attempt to enter the emerging cloud CAD systems market with a raw product that doesn't support even a fraction of Solidworks’ features; how many years will it take to fix this? Its questionable positioning among other Dassault products isn't helping either. What is their strategy? To pull users over from Solidworks? Even if we try for a second to imagine why someone might get fed up with a best-in-class product for whatever reason, why wouldn't they just switch over to Onshape based on the same Parasolid kernel? (xDesign is based on CGM, which means there are bound to be issues converting old templates.) So if xDesign is intended to attract new users, things are even worse than I thought, because at COFES I could not find one argument in favor of xDesign. And it's not just me, either! Most people talking about this informally share this opinion. 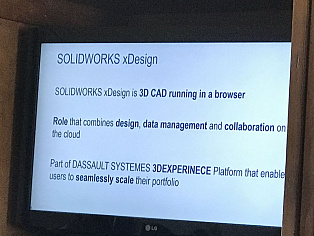 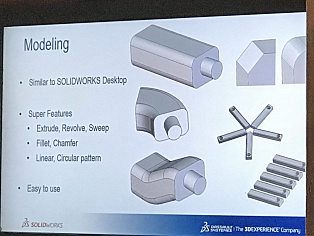 Now that we've mentioned software components, let's switch gears. I suppose the biggest surprise during COFES (at least, for me) was the news that Linda Lokay is stepping down as general manager of Spatial. Linda is a prominent figure in the global CAD market, confirmed by receiving the Leadership Award at this year's COFES. We may never know why she made the decision, but it's not hard to see a growing problem if you talk with Spatial solution users. The company's portfolio offers two geometric modeling kernels. The first of them is ACIS, written by Spatial, with a huge user database. The other is CGM, which is developed by Dassault, and was assigned by its parent company to Spatial to market it. We can't count for certain the number of CGM users, but I suspect there aren’t very many.

What is Spatial's strategy? If the company were independent, there would be no alternative to ACIS: hundreds of customers would bring in good revenue, and the main focus would be on them and developing the product to increase royalties. But what if we look at this issue from Dassault's perspective? This French company does not use ACIS, and so revenues from ACIS sales are likely lower than its own platform sales. (End-user products are always more profitable than components.) Plus it has CGM, which a great product, and its development is of crucial importance for Dassault's core business. Transitioning ACIS users to CGM will have a synergetic effect on kernel development and the development of the 3Dexperience platform ecosystem. The only question is: why would ACIS users need this?

Irrespective of future developments, uncertainty about Spatial may play into the hands of its competitors, primarily Siemens PLM and its Parasolid kernel. Apparently, Parasolid is already putting competitive pressure on ACIS, as now most often new influential CAD market players choose Parasolid. For example, OnShape and the even more innovative Sharp3D.

The C3D Labs team might also try to take advantage of this situation. For example, we entered the formerly exclusively ACIS domain as a second 3D kernel for Open Design Alliance's Teigha platform. NanoCAD Plus 10, which will be released very soon, will use our C3D kernel on an equal basis with ACIS in its 3D modelling component.

Disclaimer: As the CEO of С3D Labs, which specializes in the development of toolkits for the software engineering industry, everything written above is my personal opinion and does not necessarily reflect the official position of the company. My opinion cannot be considered fully objective and impartial due to my primary activities.